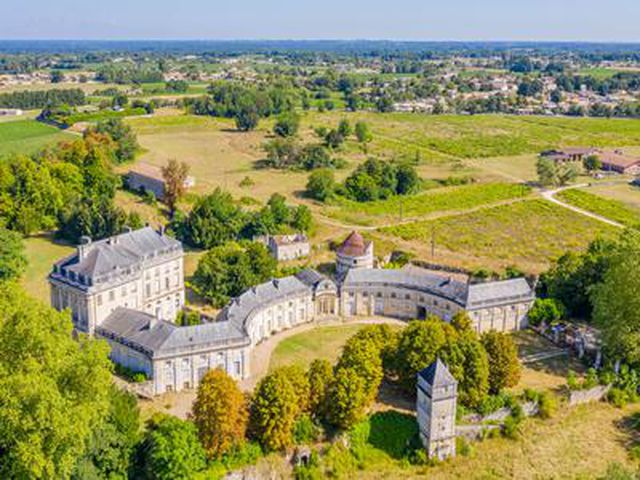 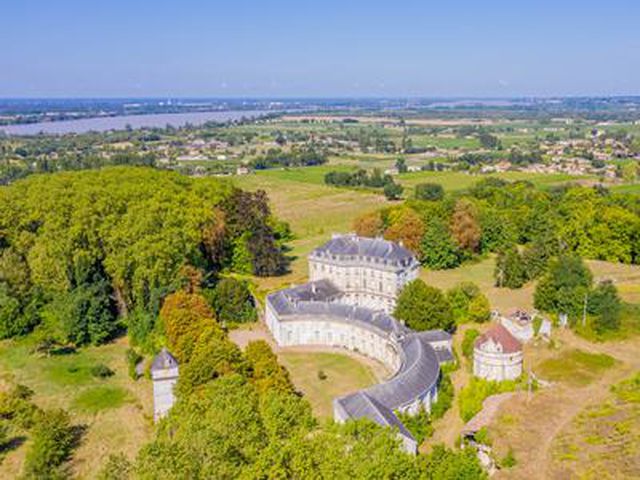 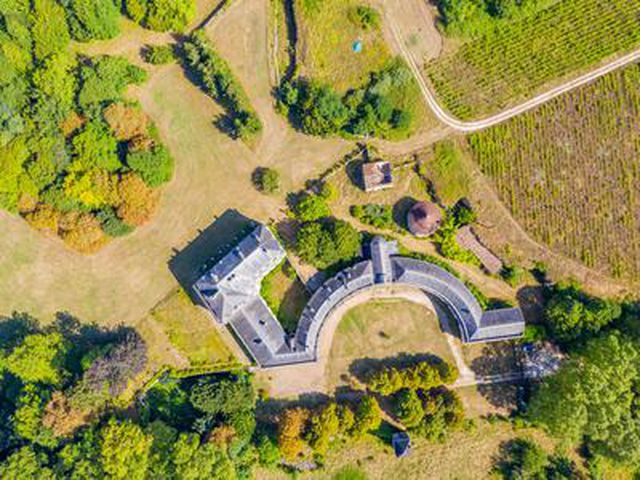 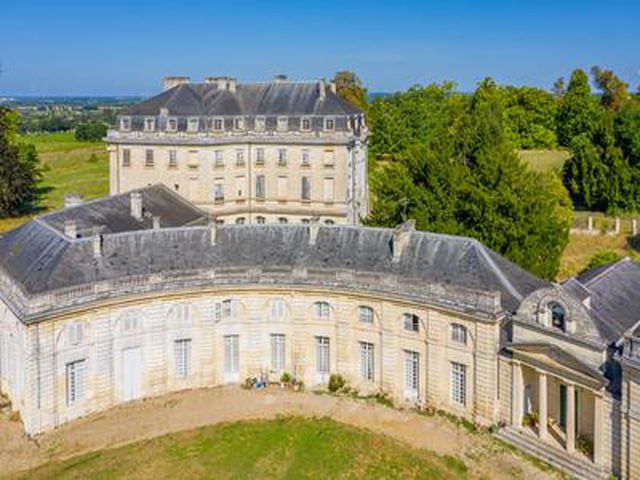 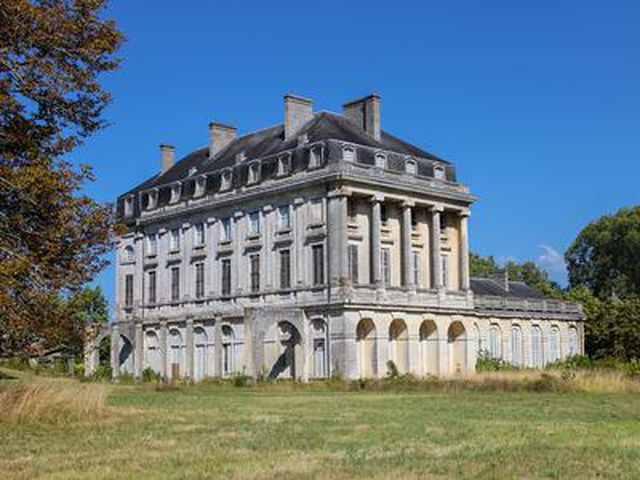 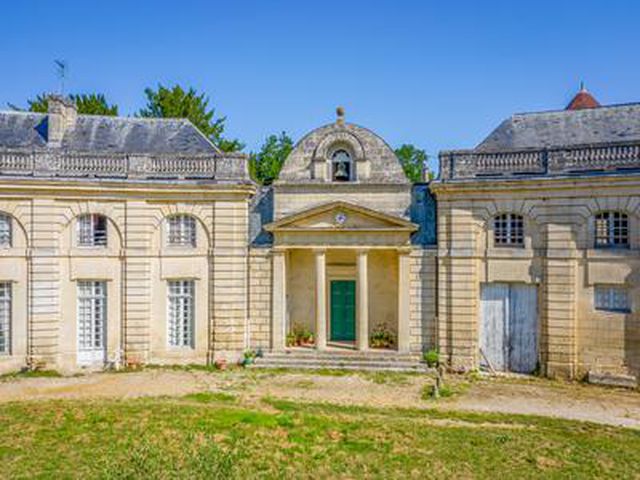 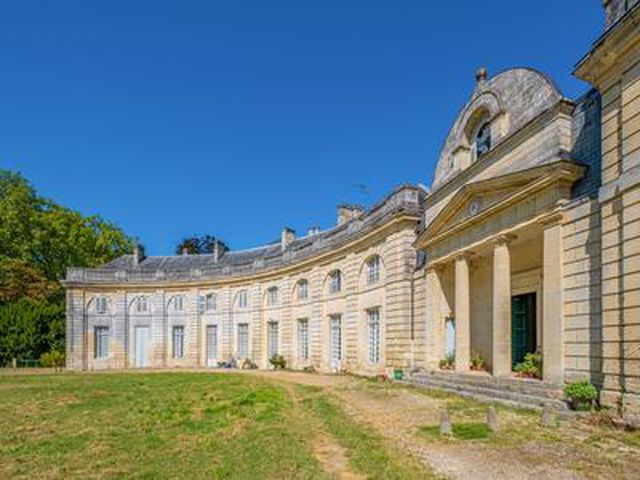 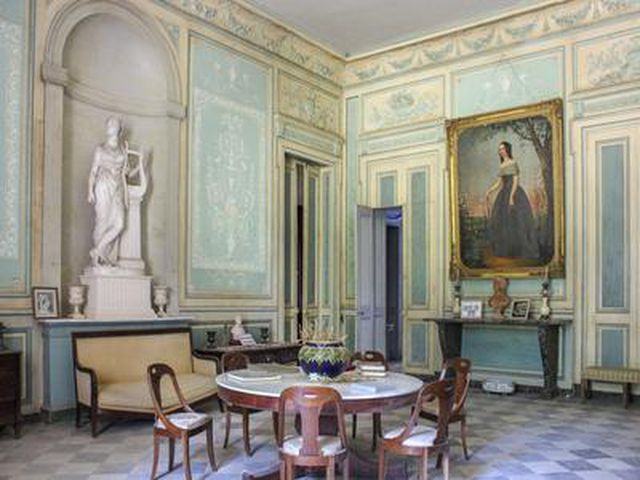 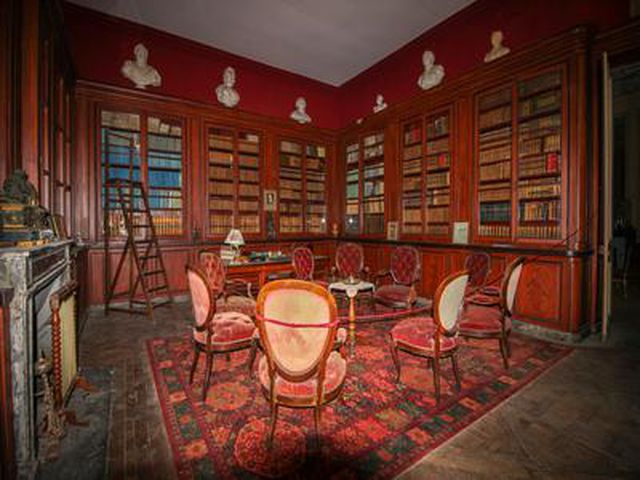 Approached by a poplar lined drive, you should really arrive by horse and carriage.

The whole property is remarkable - let's start with the impressive four storey chateau created to welcome the Louis XIV, sat behind a beautiful semi-circular entrance with a serene chapel as it's centre piece.

A delight for architects, historians and heritage lovers. There's plenty of room with approximately 2500m² of grand salons, bedrooms, library, magnificent staircases, lavish corniches and vaulted ceilings, the chateau is also surrounded by more than 10ha of park, with a beautiful view over the Dordogne, fields and woodland, and 45ha of vines.

Well situated for road, air and rail links with Bordeaux only 20km.

The original Château had belonged to the ancestors of Count Jean-Frederic de la Tour du Pin Gouvernet, Lieutenant-General of the Kings armies, since 1524, but the story goes he invited the King to his province in Gironde to which the King replied: « But, there is no château there to receive me! », so the Count was determined to transform his meagre chateau into a palace ‘fit for a king’.

Three years after the start of construction, with the French revolution and his support of the queen, Marie-Antoinette, the Count was guillotined. The grand project of architect Victor Louis was never completed and the Chateau was inherited by his son. In 1835 the family had to flee France for the second time so the château was sold, and it’s still owned by the descendants of this family. A full history of the chateau are available separately.

The château was awarded Historic monuments status in March 1943 and it was open to the public until 2014. The chateau has also been used for the background in three films.

Description:- The chateau consists of a main building of four floors, the chapel, living quarters and stables of the hemicycle, an octagonal water tower, medieval keep, concierge’s tower, three houses and various farm buildings - amounting to approximately 2500m² floor space. Note that furniture and fittings are included in the sale.

The main building comprises:-
Lower ground floor, in which there is the main kitchen of 83m² with vaulted ceiling supported by 2 stone pillars, tasting room, staff rest room, hallway leading to the stone spiral staircase, and various store rooms. At the same level on the other side of the courtyard, you can find a utility room, wood store and gardeners’ shed, boiler room and other cellars.

The ground floor is the show piece, with the magnificent entrance and staircase, perfect for those wide gowns and feathers of the 18th century. Beyond this the foyer with doors to the 70m² marble salon which could seat up to 80 guests for dinner, the music room, and small salon. Other rooms on this floor include the family salon, the 5.6m high billiard room, the 62m² dining room sided by a serving room, a study full of built-in cabinets filled with antique books, and finally the Duchesse du Berry bedroom with her dressing and chamber de toilette.

Between the ground floor and first floor there are six smaller bedrooms certainly for the servants.

Another impressive stone staircase takes you up to the first floor with 7 bedrooms, 3 of which have double doors going out to a balcony, dressing rooms, cabinets de toilette, and a large bathroom. The second floor is accessed by the spiral staircase where there are a further 7 bedrooms of varying sizes, laundry, storage rooms, dressing and cabinet de toilette, a small kitchen and a large salon.

On the top floor there is an open space with just a few stone walls – this is a blank canvas to make an incredible loft with windows all around, a balcony on one side, wooden floorboards and plenty of height to add a ceiling.

The hemicycle comprises living quarters to the left and stabling to the right, with the chapel and vestry in centre position. The living quarters consists of the tourism office, grand salon, small and large dining rooms, kitchen, and office on the ground floor with a stone staircase taking you up to the first floor where there is a large laundry room, seven bedrooms and various dressing rooms, cabinets de toilette and a bathroom. On the right of the hemicycle are the vaulted stables and grooms quarters which include another 4 bedrooms.

A drawing of the layout and details of the various rooms, their sizes and features is available on demand.

The Chateau can be approached through two main gates, one to the south and the other via the avenue of trees. The buildings are surrounded by 10 hectares of park and woodland and another 60 hectares of agricultural land, including 45 hectares of vines. The three registered wine labels associated with the Chateau are included in the sale.

Note that one hectare (10 000m²) of the land to the south has been given ‘touristic’ status which allows for the construction of projects such as spas, pools, tennis courts etc.

In addition there are 7 hectares of caves, an underground storage supported on stone pillars.

Situation: The Chateau is situated in the commune of Saint-André-de-Cubzac, with all commodities within walking distance, supermarkets, restaurants, twice weekly market, bus and train links to Bordeaux, in addition is just 5mins from the A10, 20 km from Bordeaux with it’s airport and TGV train link to Paris, and under 30km from the UNESCO world heritage sites of Blaye and Saint Emilion.