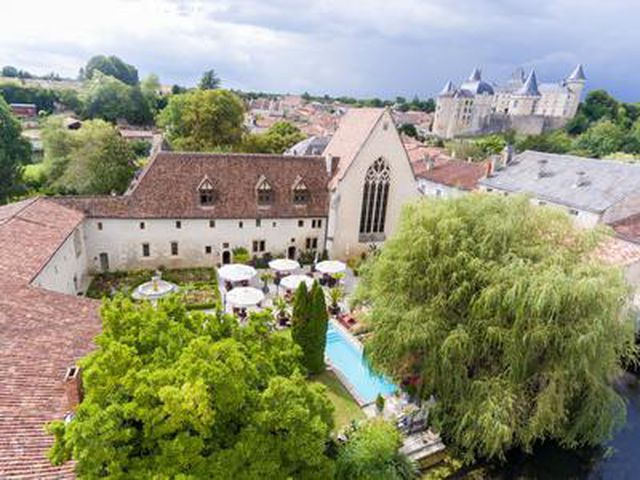 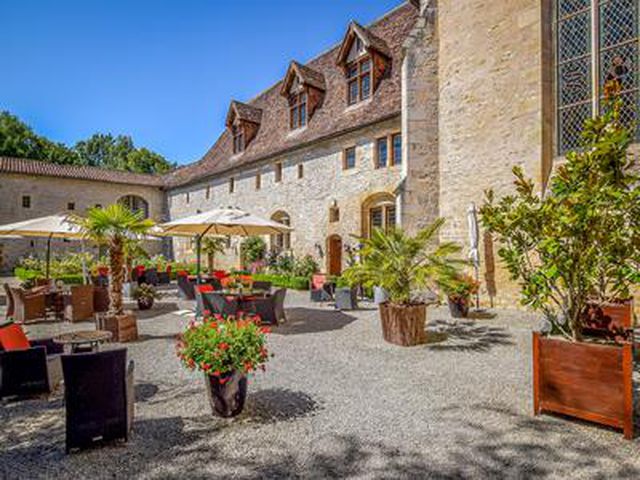 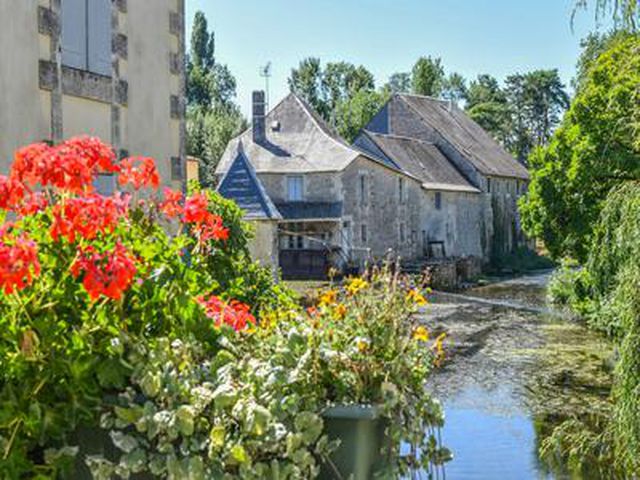 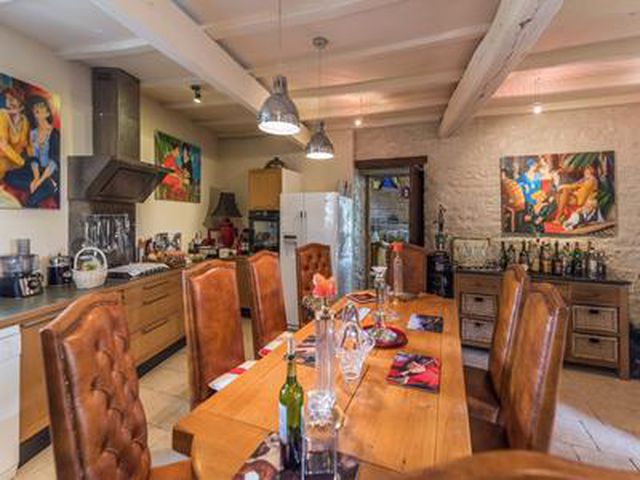 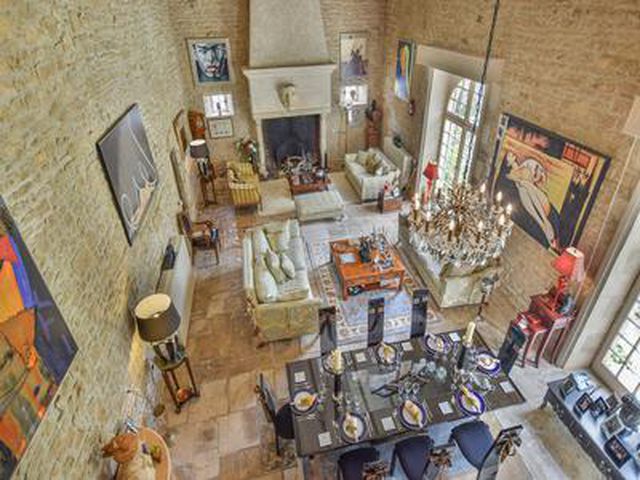 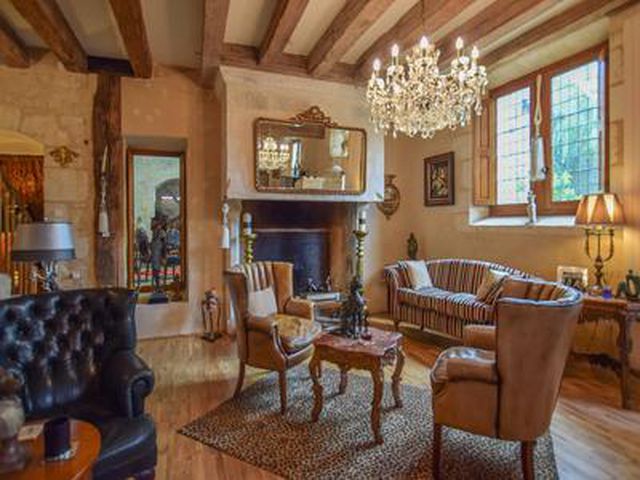 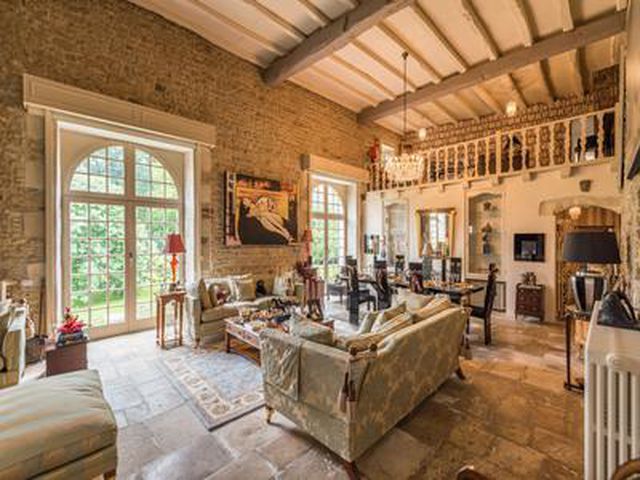 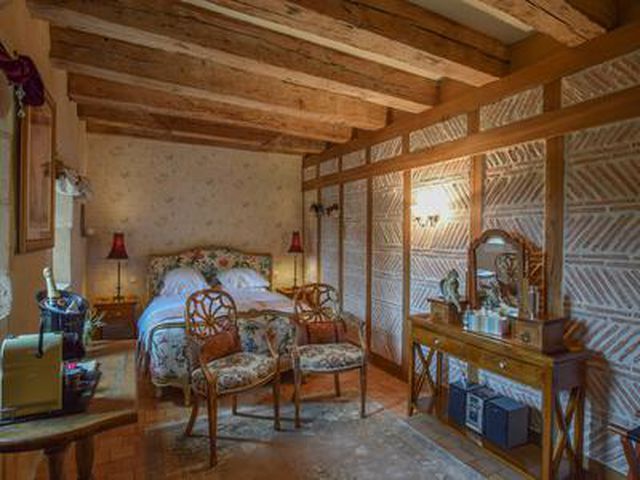 A possibility to acquire one of the jewels of France. An exquisite and rare six-suite hotel and restaurant, a two-bedroom family home with adjacent bridal suite, swimming pool, attached 15th century church and ancient chapel in the heart of an historic Charentaise town;
Set on the banks of the River Charente, the couvent was founded by Jean de La Rochefoucauld, Baron of Verteuil.

The business is successful, hosting about two weddings a month during the spring and summer at a cost of € 5,500 to € 10,500, with some corporate events and private rentals during the rest of the year.

In 2017 the restaurant was awarded the Lux award for best fine dining in the Charente department.
The discerning purchaser will be impressed with the attention to every detail at this beautiful hotel and private residence, making the ancient property a destination for travellers and offering a riverside boutique wedding venue or a family home with a difference.

Le Couvent des Cordeliers was founded by Jean de La Rochefoucauld, Baron of Verteuil, as a small convent with eight cells, courtyard garden, cloisters and church, belonging to the Franciscan order. From the 17th century the convent has been a prison, holding up to 30 prisoners during the revolution (their inscriptions can still be seen in stonework around the windows), a retirement home for priests, an orphanage and a boarding school.

During the Reformation the convent and church fell into disrepair, but while renovating the property, discovered ancient frescoes that are now on display in the church and the restaurant. In the 1960s a number of old vaults and a crypt where bones were laid were discovered under the church. The bones are reputed to be from the Rochefoucauld family. There are also said to have once been tunnels running to the nearby Château du Verteuil, but these were apparently sealed off by a previous owner.

This discreet boutique hotel and venue comprises the former monastery/convent with attached 15th century church and ancient chapel, set around private gardens and swimming pool. All of the 7 guest rooms and suites and owners' house have been refurbished with the highest quality furnishings and fittings, ensuring that guests can relax and luxuriate in the beautiful surroundings. An ideal venue for weddings or family gatherings, with exclusive use of the hotel being offered.
A property offering real flexibility for potential purchasers, which could remain as a hotel or equally be a family home, the 15th century historic building comprises:

Elegant salon and dining hall with authentic fresco and Charentaise fireplace.
Professional chef's kitchen (at one time the town prison, evidenced by carvings in the stone) and preparation rooms.
Three bedroom suites on the first floor, one of which connects to the owners' property, all with luxury en-suite facilities.
Three bedroom suites on the second floor all with luxury en-suite facilities.
Bridal suite with its own entrance hall, with a free-standing bath in the bedroom as well as a shower-room with Italian shower. Door to private garden area.

First floor, with wooden floors throughout. A large corridor from which leads:
Dressing room.
A large twin bedroom.
Chic bathroom with free-standing bath.
A light and airy double bedroom overlooking the garden.
Corridor connecting to bedroom 3 on the first floor of the boutique hotel.

Externally, the gardens are laid out to offer eating and seating locations with a decked area next to the beautiful pool. All overlooking the River Charente that flows by the hotel.
A large stone barn is used as a garage and for storage. The 15th century Church of St Francis allows for weddings or partnerships to be sanctified, with seating for upto 40 guests.The Protected Status of the building safeguards many original features such as Gothic windows and the historical artifacts discovered herein.

Verteuil-sur-Charente is one of the prettiest villages in southwestern France, being dominated by its fairytale chateau. Populated with several eateries and the ancient mill, it draws visitors from throughout the world.
For those wishing to travel further afield, Cognac and its renown brandy houses is just 1 hour away (80km) with skiing in the Massif Central just 2 1/2 hours distant and Paris 1 1/4 hours by fast TGV train, also going straight into Charles de Gaulle airport terminals. Nearest airports are located at Poitiers (75km), Limoges (90km) , La Rochelle airport and the cost (140km) and Bordeaux. The North/South RN10 main route is just 6 km distant.