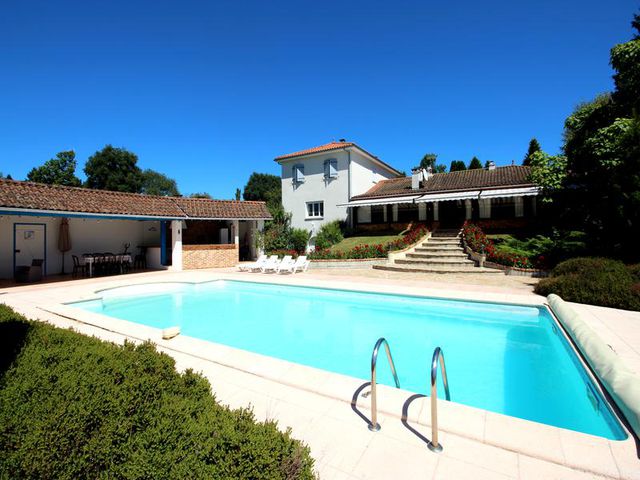 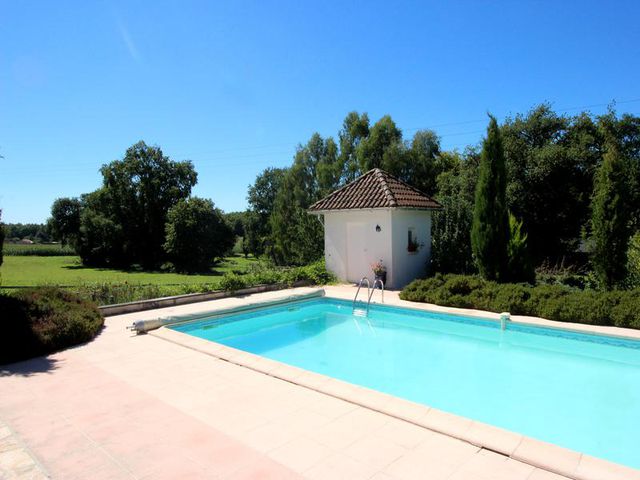 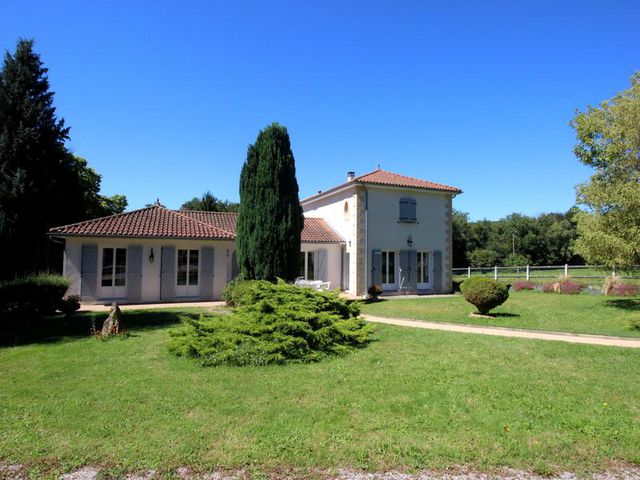 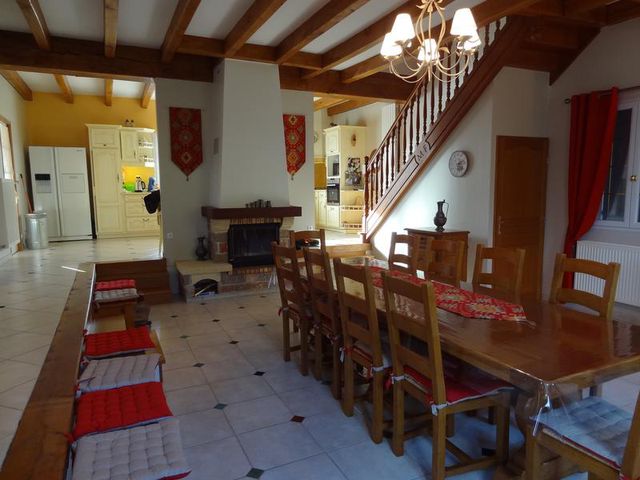 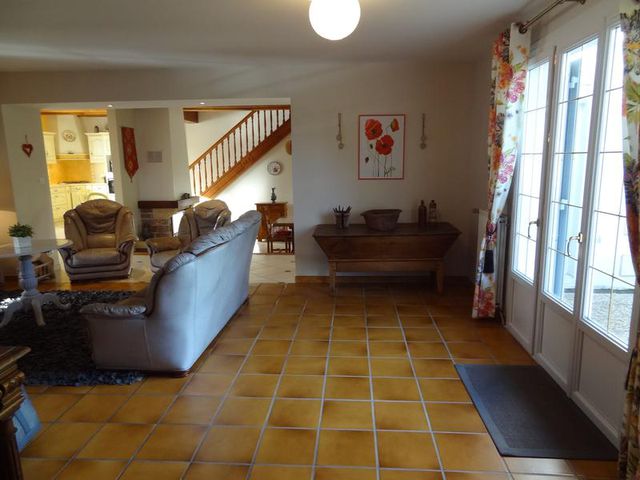 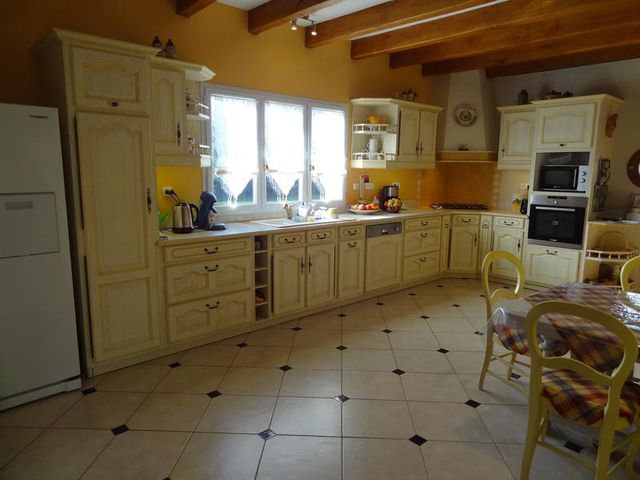 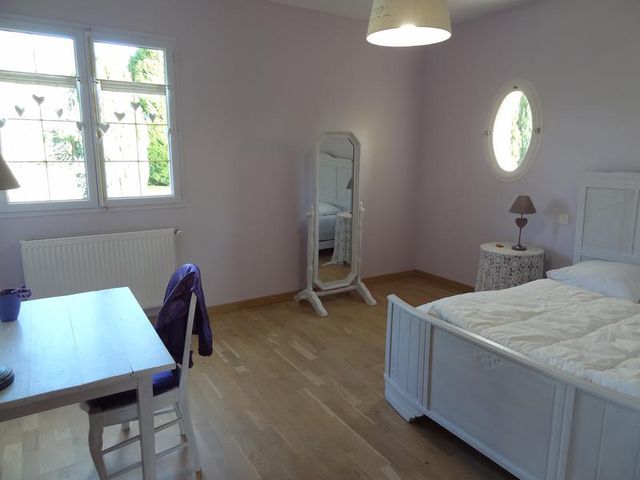 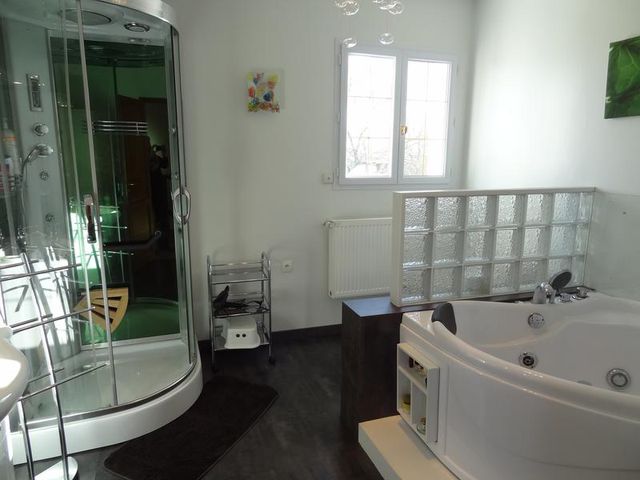 Happily situated in its own mature grounds, this property enjoys the peace and quiet of the countryside, with all the benefits of a small town just a few minutes drive away.

The house itself has been beautifully decorated throughout by its current owners and truly has a “wow factor” when you walk through the front door. It benefits from double glazing, oil-fired central heating and two fire places, one open, and one with log burner, on the ground floor. The house is spacious and bright throughout, thanks to the many windows and French doors on both sides, overlooking the garden.
All the high quality furniture is included in the price.

On the ground floor, the entrance hall, lounge, kitchen and dining room are all open-plan, though the dining room is on a lower level.

The lounge is centered around the open brick fire place, with the kitchen on the same level, just around the corner. This is fully fitted with many units and a lot of work surface. There are French doors leading out to a large conservatory and the garden.

The dining room is a couple of steps down from both the kitchen and lounge and here, there is the second fire place fitted with a log burner. The entire ground floor is tiled.

To the left of the entrance hall, a corridor leads to three bedrooms of good size, a large bathroom with bath and shower and a separate wc. There is also the former kitchen, which is now used as a utility room.

At the other end of the house, stairs lead from the kitchen to the first floor landing, off which there are a further two bedrooms, a large bathroom, and separate dressing room. The rooms are all spacious, including the dressing room, which could be used as another small bedroom, if required. The bathroom is tiled and fitted with a jacuzzi style bath, a large shower, a sink and wc.

Underneath the house, there’s a large cellar, which includes the garage. Here too there is a lot of space including a long room which has been converted into two office spaces, another two rooms, currently used as two spare bedrooms, a bathroom and a utility room.

There is a second cellar, accessible from the lounge and pool area, This is also a good space for storage and has electricity.

Wide steps lead down from the conservatory to the terrace and swimming pool. At one end, part of the terrace is closed in, to allow for a small outside kitchen and plenty of space for outside dining, even if it’s raining. There is also a small changing room with sink and wc right beside the pool.

At the front of the house, there is a small outbuilding, which currently serves as a storage shed and then at the rear of the house, at the bottom of the garden, there’s a large separate workshop.

The grounds surround the house on all sides and are mainly laid to lawn with mature trees and conifers. There are two separate entrances, which sweep round the front garden, on both sides to meet in front of the house.